Google unveiled it’s newest iteration of the driverless car, this time without a steering wheel or brake pedals.  It looks a bit like a smart car crossed with a Beetle and a koala, but I’m still pretty excited about it. 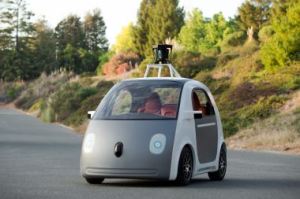 I have never bothered to get a driver’s license, and it seems now like I was a (relatively) early-adopter of car-free life instead of a life-long freak: the proportion of young people with licenses has been steadily declining over the last ten years.  When I was 16, I looked around and saw lots of teenagers getting crappy cars to drive to crappy jobs to pay for their crappy cars, and decided that I didn’t really want to be involved in that cycle.  Spending 15-30 hours working at Dairy Queen didn’t seem like a terribly valuable experience.

Since leaving St. Louis, I’ve actively made decisions that put me in places where it’s easier to live car-free.  I did bits of undergrad in Boston, Budapest, and Eugene, Oregon, all of which are great places to live without a car.  Graduate school was in Davis, California, consistently ranked one of the most bike-friendly places in the US.  And my main gripe with Toronto isn’t my ability to get around, but rather the difficulty of getting past the sprawl for long bike rides.  On the whole, I think I’ve ended up living in better places because of the non-driving constraint. I’ve certainly spent less time bored in traffic.

About twice a year I find myself in a situation where it would be useful to know how to drive.  But (as of 2009) the average person spends about $9,000 per year on their car, taking into account vehicle cost, gas, maintenance, and insurance.  The poorest car-owners spend around $3,000 per year.  I spend significantly less on transit, so occasionally shelling out for a somewhat ridiculous solution to carlessness is really not a bad deal.  And with the gig economy expanding, it’s much easier to find someone to help move the occasional couch.  The main difficulty is really that I can’t take a rental car out to the mountains on the weekend.  (Instead, my small trips involve a train and a bike, usually.)

It’s looking, though, like if I wait just a bit longer, I’ll lose ALL of the reasons for learning to drive.  It’s pretty exciting, on a lot of levels.  For myself, I can envision renting a car to head to strange places in the middle of nowhere.  But I also envision a world where it’s easier and safer to bike in traffic, where people are dying in car accidents less often, where vehicles are more efficient, where cities are built for people rather than cars.

It’s been a rough few years for the future.  Between climate change and the steady creep of unbounded surveillance, between right-wing hostage politics and the steady failures of market economics, things haven’t been looking too bright.  It’s nice, at least for today, to have one positive development, which might point a way through at least some of the tangled mess that is the American present and into a future we’ve been too busy to properly imagine.

tom denton is a slightly-reformed mathematician, working as a machine educator in the bay area. In addition to statistical learning algorithms and combinatorics, tom also is interested in hardware hacking, e-learning, music, and bicycles.